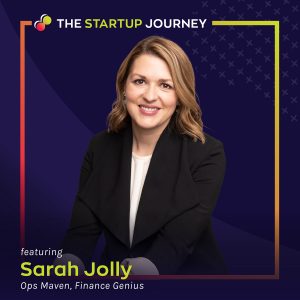 In this episode, we have a very special treat to kick off the New Year. Joining us today is COO, CFO, and co-founder of Precursa, and accounting genius, Sarah Jolly! Sarah shares her story of the transition from corporate to entrepreneur, talks about the challenges women and minorities have with raising money, and shares her thoughts about what we can do to shift that dynamic to create a more equitable world for all founders. This episode is absolutely packed to brimming with wisdom and insight you won’t want to miss!

Today’s guest is a wealth of wisdom, knowledge, and insight (in addition to being one of our favorite co-founders on the planet!), COO, CFO and co-founder of Precursa, Sarah Jolly. Sarah is rocket fuel – a powerful mixture of multidisciplinary experience, leadership, and gifted at simplifying and solving complex problems, if you have a problem, (yo) she’ll solve it! After spending over a decade in corporate accounting, Sarah found her passion in growing companies where she could rock all the aspects of the business. And of course, she’s a finance ninja. In our conversation with Sarah, she talks about her story, her passion for female entrepreneurs, and her experience with advising and investing in women leaders and founders. Our conversation ranges from whether credentials really matter, to why funding is such a challenge for women and minority founder, to what contributes to inequity in funding and leadership across all segments and industries. We also discuss whether the path for women to succeed looks like “being men”, or if there is another way forward that allows us to be authentically ourselves. Sarah’s story and passion will make you feel brave, and he wisdom and insights will make you go, “Oh, right!!” Follow Sarah Jolly on LinkedIn. Check out Sarah’s recommended resources here: “Grow the Pie” by Alex Edmans “Radical Candor” by Kim Scott And here’s that link to Dr Dana Kanze’s TedTalk about why female entrepreneurs get less funding (and the research she did behind it). Be sure to like, share, and subscribe to Precursa: The Startup Journey on your favorite podcasting platform and tune in for the next episode! Email us with any questions or comments (startup@precursa.com). Check out our website (https://www.precursa.com) for more information on getting your startup rolling.

Cynthia Del'Aria is a serial entrepreneur and tech startup ninja, specializing in product-market fit and idea validation and helping new entrepreneurs reserve their time and money for the idea with the best shot at success. With two successful exits before 30, an active high-profit-margin SaaS in the commercial airline space, and two additional startups in the works, she knows what it takes to traverse the entrepreneur journey, the highs, and the challenges of turning a vision into a successful, viable business.

Request an invite to join precursa

Enter your information to join the waitlist. When we launch, your invite to the platform will be issued in the order you joined the waitlist.

!
!
Get your invite
Something went wrong. Please check your entries and try again.